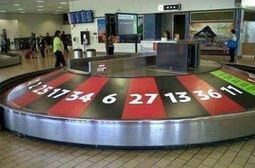 How To Pack It

Although carry-on travel is a significant benefit of travelling with one bag, not everyone chooses to exercise this option. Further, the rules for carry-on baggage vary (especially on smaller aircraft and in out-of-the-way places), and you are at the mercy of capricious transit personnel in any case. So there may well be situations where you choose — or are obliged — to check your bag.

Prepare for this eventuality when packing, by ensuring that those items that you absolutely must not lose (or might be damaged in a checked bag) remain with you when your bag cannot. Your daypack will come in handy here; make sure that it is readily accessible, and contains these critical items. Of course the most critical items should be in your security pouch anyway.

If You Must Check Bags … Useful Things to Know

A surprisingly high percentage of lost and stolen luggage (87% in one year) originates at curbside check-in stations; avoid them.

The most common cause of mis-routed bags is routing tag errors; know the three-letter code of your destination airport (LAX, ORD, JFK, LHR, etc.), and verify it on the luggage tag before your bag vanishes down the conveyor belt. It's particularly important to do this when booked on connecting flights: occasionally, bags are not tagged for the ultimate destination, and you are responsible for retrieving (and re-checking) them at the intervening airport(s); the best way to confirm this is by inspecting the tag.

Remember that carriers not only charge for having too many checked bags (with "too many" often meaning "more than none"), they also charge extra for bags that are too big or too heavy. With most carriers, these various charges are cumulative. So before heading to the airport, familiarize yourself with the rules, which vary considerably among the different carriers, may change with little notice, and can be surprisingly complex (depending on fare class, frequent flyer status, destination country, etc.). Understand also that airport luggage scale readings should be considered suspect.

If you're over your weight limit on a particular checked bag, make use of a packable spare bag to divide the load: the charge for an additional bag is usually less than that for an overweight one. Your daypack or lightweight duffel will come in handy for this purpose.

Don't make life too easy for the bad guys. Luggage festooned with tags & stickers announces that you're a frequent flyer; thieves target such bags, assuming wealthy travellers. It's also foolish to put your home address or phone number on luggage tags, or elsewhere on the outside of your bags; miscreants (who have been known to collaborate with airline employees) will call your house to see if anyone answers, and target it for robbery should they discover otherwise.

On the other hand, putting your contact information on the inside of any checked bags is a good idea. When your bag goes astray, there is a good chance that it will have been separated from any tags it may have had; identifying data inside the bag allows the airlines to return your luggage. If you include your intended itinerary (including hotels) as well, they may even be able to track you down en route. Absent these options, they will have little choice but to consign your belongings to Alabama's infamous Unclaimed Baggage Center.

Taking this notion a step further is the growing interest in "smart luggage", bags with built-in (or added on) radio transmitters to help track them down when they go missing.

Photographing your bag and its contents (especially anything of significant value) is always a wise move. When the bag is misrouted, such records enable you to show the airlines exactly what they are looking for; they're also good for reimbursement/insurance purposes should the bag be truly lost. And always contact the offending airline as soon as possible after discovering that your bag is not where it's supposed to be.

If your bag does not have some distinctive visual feature, think about adding one (which can be as simple as tying a coloured bandanna to the bag handle). This makes it easier to spot yours among the countless black bags that arrive at the luggage claim area, and helps thwart the thieves who would like to make off with it before you realize that it's gone. Just be sure that the feature truly is distinctive (like the example at right): a bit of pink ribbon is unlikely to be sufficiently unique!

Once your bag disappears from view, it is highly likely to be subject to some very rough handling (think "football", only with your belongings). Prepare in advance for this, by ensuring that anything breakable — or leakage-prone, such as liquids and gels — is packed as securely as possible. This means well padded, and located in the very centre of the bag; items packed close to the sides or edges of luggage are quite commonly damaged in transit.

The following video offers what many will find to be a surprising view of the real world of checked luggage (keep in mind that the figures given are for the U.S. alone; worldwide, they are much larger, and proportionally worse). I think this should be required viewing for anyone planning to check a bag!

Don't assume that those to whom you entrust your luggage are necessarily taking care of it. Many's the bag that has vanished because its owner assumed that the taxi driver was placing it in the back of the vehicle.

Finally, if you expect to check bags, be sure to allow extra time at the airport: those lineups are inevitably longest when you are least prepared for them, and you want to check your bag no later than 45 minutes prior to flight time. On the other hand, don't check bags too early either (more than about 90 minutes before flight time), as the airport may not yet be set up to service your flight, and your luggage can end up in limbo.

What do others think about checking bags? Don't miss the TraveLetters page!

The security of checked luggage is dubious at best. Some airlines require that such bags be left unlocked, to facilitate inspection. Others suggest the use of special "approved" locks that can be easily opened by security personnel. Nobody, however, offers any guarantees as to the honesty of security personnel; there have been numerous reports showing that the methods used to recruit and train such people leave a great deal to be desired. So never place anything of significant value in a checked bag.

The best way to keep your valuables away from a thieving TSA agent or airline employee is to not check a bag, of course. It deprives the agent of an opportunity to enrich himself, and the airline of a … checked luggage fee, which it shouldn't be charging in the first place.

The use of padlocks on luggage introduces an additional — and less obvious — problem, that of damage caused by airport baggage handling systems, in the following manner: 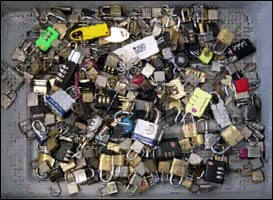 The above photograph shows 244 locks collected from under an airport baggage handling conveyor belt, at a point where two belts come together, over a one-month period at a single New York airport. Depending on the bag design, the strategic use of duct/gaffer's tape (to prevent locks from dangling) can reduce the likelihood of this sort of mishap.

The folks who help themselves to the contents of other people's luggage have recently added a new wrinkle to their act: when they pilfer items from a bag they also switch its tag, intentionally misrouting it. This guarantees that the bag will travel a much further distance to its final destination, both delaying discovery of the theft and making it more difficult for authorities to pinpoint the location of the deed. Nonetheless, you should always promptly report anything stolen to airport security and the affected airline.

As there is an excellent chance of checked baggage being manually searched by security personnel, realize that your careful packing efforts may well be for naught. The delicate glass figurine that you safely tucked inside a shoe could easily end up somewhere else, and in more pieces.

Finally, remember that you should be concerned not only with the issue of items being removed from your bags, but those being introduced as well. This is of particular concern to international travellers: a number of reported cases have involved the transport of contraband goods in the checked luggage of unsuspecting passengers. There are even cases where people have been imprisoned because of articles allegedly introduced into their checked bags. And though such occurrences are uncommon, it would be foolish not to consider the possibility of their happening to you.

“Mishandled” Baggage: What Are Your Chances?

When I fly? I like to bring just a carry-on.

Recent U.S. Department of Transportation figures (based on reports from the twenty leading U.S. carriers) report that the odds are about 1 in 137 that your bag on any given flight will be misrouted, pilfered, or severely damaged; this means an average of 1–3 unhappy passengers on every flight. At certain times of the year (December, for example), the numbers are poorer.

The odds are also worse in Europe, where the 2007 average is 1 in 60. In less developed countries, your chances get worse still. In 2007, more than 42 million pieces of luggage were "mishandled" by the world's airlines (about 80 bags/minute, 24 hours a day, every day). That's one bag for every 54 passengers, according to SITA, which tracks and reports such industry information.

When is missing baggage actually deemed lost? There are no government regulations stipulating this time interval, though the Montréal Convention says it should be 21 days after it disappeared. Further, many travellers have rather naïve ideas about the compensation due them for such mishaps; a helpful overview published by the Air Transport Users Council (the UK-based consumer watchdog for the airline industry), entitled "Mishandled Baggage", offers illuminating reading in this regard. Additionally, realize that airlines won't compensate you for any electronic items that you claim were in your bag, not to mention a host of other types of valuable belongings (usually listed in the fine print on their respective Web sites).

That said, and despite my belief that commercial airlines are not serving the public well with their plethora of extra — often hidden — charges, I am not one of those who begrudges them their now fairly commonplace checked luggage fees. There is a rathering staggering amount of cost associated with the handling and transport of such items, and I have always thought it more fair to assign such costs directly to those who use the service, rather than transfer them to those who travel more efficiently. Consider what is involved:

Add in curbside check-in facilities, baggage carts and their management, and "left luggage" storage, and the true extent of this enterprise becomes clearer, even though a large percentage of the effort is expended on transporting stuff that will never be used!

This, of course, assumes that all goes well; additional costs are incurred — and time lost — when an aircraft change must be accommodated, with baggage being off-loaded from one and transferred to another.

And let us not forget the environmental costs.

Will you really need that portable DVD player, and five pairs of shoes?