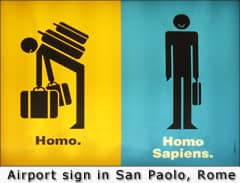 A Popular Internet Destination Since 1996

I have always travelled a great deal, for both business and pleasure, and — like other seasoned travellers — soon found that the lighter my burden, the more pleasant my journey. Consequently (and unsurprisingly, given my background as both an engineer and scientist), I have thought a lot about the subject, read extensively on the issues, even attended seminars on packing techniques. Most important, though, is that I've actually tried all this stuff out, experimenting with a variety of solutions in many cases.

This Web site affords me an opportunity to share the resulting opinions … and, I hope, save you from repeating my mistakes.

And yes, I know that there's a lot to read on these fifty-odd pages. Travelling light is a goal at the end of many diverse challenges, and I strive always to describe things in detail sufficient to illuminate the "why" behind the opinions. The Web already has plenty of travel sites that offer advice with no evidence as to why it should be expected to work (and, consequently, it often doesn't; there is a rather distressing amount of well-intentioned "travel folklore" that is just plain wrong).

For the convenience of long-term users, I announce all substantive content changes (though not the many small updates that occur on a more-or-less daily basis) via Facebook, Twitter, and an RSS feed.

Want to link to OneBag.com?

The red navigation panel in the header (top) of each page lets you access subject areas on an individual basis; use this when you're looking for something particular (you can also use the search page, for even more specificity).

Buttons at the bottom of each page let you progress through the pages sequentially, and also provide a quick return to the navigational panel.

Finally, clicking on the "OneBag" logo in the header will scroll down to the beginning of the textual portion of that page.

What This Site Isn’t

The biggest mistakes … ? Packing too heavily, relying on outdated guidebooks, not wearing a money belt, leaving home with too many hotel reservations, and taking other people's opinions too seriously.

OneBag.com is neither a blog (it's not chronological) nor a commercial site (I have nothing for sale), but a Web-based instruction manual, an information repository that is constantly being revised. I probably devote more hours to it than most bloggers, but the output isn't an ever-increasing stream of stuff to read: rather, it consists of refinements and updates to existing topics, plus a modest addition of new material over time.

Consequently, it can be easy to assume that this site is fairly static, as it does look much the same from visit to visit. Rest assured that it is not, a fact that you can easily confirm by checking the regular changes in the revision date found at the bottom of every page. If it's ever more than a modest number of days since the last revision, you can be pretty sure that I'm off travelling somewhere, testing — in the real world — all these ideas and items that I discuss. And this, ultimately, is what differentiates OneBag.com from the many travel sites whose content consists primarily of reworded (sometimes not even that!) marketing claims from countless companies trying to sell you stuff. "The Ten Items Every Traveller Should Pack" is marketing, not educating. (And anyway, there are only two — a passport and a credit card — and you can make do without even them if you aren't going very far.)

The information on these pages is not targeted at campers, long-distance hikers, & such (who must additionally deal with food, shelter, sleeping gear, stoves, etc.), though they may find much of it useful. They certainly shouldn't miss Ray Jardine's book.

Neither is it directed at those planning extended stays at single destinations — resorts, cruise ships, a summer at Cousin Bob's lakeshore cabin, a year at La Sorbonne, etc. — especially if specialized clothing or equipment is necessary. Such activities can demand an even more varied wardrobe than that presented here, and typically involve minimal travel, thus many of the issues addressed here are of less concern (though there are still plenty of relevant ideas on these pages). That said, understand that attempts to replicate one's "familiar" lifestyle are a good way to subvert a common goal of such temporary relocations: experiencing the place and purpose of the destination.

And of course there are those who have made business or lifestyle choices that preclude them from travelling without lots of "stuff". And some with medical needs/restrictions that require bulky, specialized equipment. Readers in these categories can definitely discover useful ways to lighten their loads here (and thus improve their travel experiences), but shouldn't be surprised if they find themselves unable to join the ranks of those who truly travel lightly.

This is not a general-purpose travel site; it is devoted primarily to techniques for improving travel skills (thereby reducing stress), all based on my own personal knowledge and understanding. This verifiable information stream is, in fact, the principal attribute that has made the site so popular over the years. I do suggest several more broadly-focused sites (on the TraveLinks page) for those who wish them.

Finally, OneBag.com is not a product review/comparison site (Kevin Kelly's contrary opinion in his otherwise amazing "Cool Tools: A Catalog of Possibilities" notwithstanding). You will find plenty of product recommendations, based on personal experience and my own opinions of what constitutes "best in class", but very little in the way of full-blown reviews, or Product A vs. Product B comparisons. Frankly, I find most such "reviews" to be fundamentally dishonest: they are often tied in some (often surreptitious) way to manufacturers, and rarely reflect what I would consider rigourous, dispassionate evaluations. To do so (e.g., Consumer Reports) requires an investment in time, equipment, and expertise that is simply insupportable by a non-commercial site such as this one. I am always open to (relevant) product suggestions — from suppliers and users — and am happy to update my recommendations whenever I discover better ones.

Keeping in mind that those who travel lightly seek to eliminate things, not acquire more of them!

As a convenience to readers, I have provided for Google translation services to render the pages of OneBag.com in different languages: simply select your desired language from the menu on the left.

Machine translation is not nearly as accurate as one might wish. Additionally, some components of the site are inaccessible to the service, and proper spacing (in menus and elsewhere) is often disturbed, depending on the particular language involved. So it's an imperfect solution to be sure, but one that I hope will at least partially extend the usefulness of OneBag.com to its international audience.

What Happened to “The Compleat Carry-On Traveller”?

This site was originally known as The Compleat Carry-On Traveller. I discovered, however, that the emphasis on the term "carry-on" led many to believe that it was primarily concerned with airline travel. This has never been true; if there is an abundance of air travel information here, it is only because of the popularity of that mode of transport among Internet users. Learning to "travel light", however, is a skill that transcends any vehicles being used. 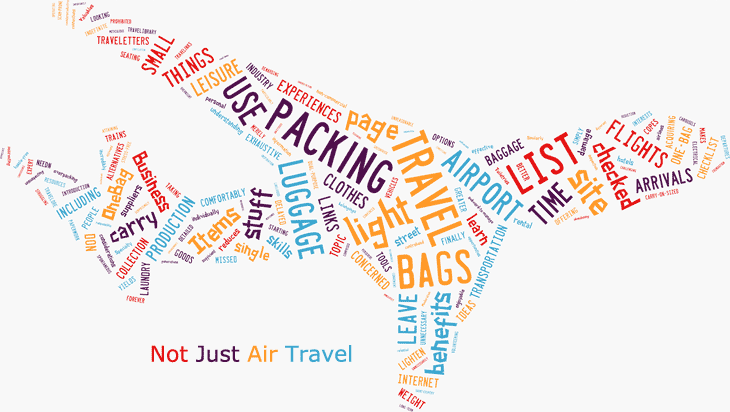 Thus, in 2002, the site became simply One Bag, with its own domains (OneBag.com and OneBag.ca). This change also stemmed the flood of queries about the word "compleat" (which means "highly proficient").

Why Isn’t There a OneBag.com Forum? 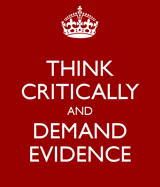 A number of readers have suggested a companion forum for this site, and I've occasionally entertained the notion of adding one, but have thus far decided against it. As I peruse even the better of the existing travel forums (such as Lonely Planet's deservedly thriving Thorn Tree), I find that there is a significant amount of bad advice intermingled with the good.

This is generally not the fault of the posters, most of whom I am sure mean well; it's just that far too many people are eager to dispense opinions concerning topics with which they clearly have limited experience, and offer recommendations based solely on folklore, advertising claims, and the like. And I would not like to have people act on misleading information found on One Bag, even if I were not the one who put it here!

Full Disclosure: Why Are There Ads Here?

This is a non-commercial Web site. I have no sponsors. I have no travel industry relationships. I have no products, subscriptions, or privileged access to sell, only information that is offered freely to everyone. I have no corporate connections, except indirectly as described below. The unbiased nature of my suggestions is, in fact, one of the principal reasons for the popularity of One Bag over the years.

The upkeep of a site such as this is not an inexpensive proposition, however. Consequently, I have two associations with outside companies that I thought you should know about:

(1) Where appropriate, I provide links to Amazon.com for a handful of books and other items that I recommend; it's a convenient way to provide continuously updated price and availability information, and usually displays pictures as well. Amazon also makes it cost-effective to purchase smaller items without incurring disproportionate shipping charges. As an Amazon Associate I earn a small commission from qualifying purchases made via such links.

(2) The main pages of this site incorporate modest displays of what I hope you'll find to be fairly unobtrusive text and graphical advertisements. These ads are served by Google, from whom I receive a tiny payment each time someone clicks on one. I have no affiliation with the companies mentioned, and am generally not in a position to provide advice concerning their particular products or services.

These payments are used to help defray operating costs; they influence neither my opinions nor my recommendations.

Finally, all writings on this site — except when clearly designated otherwise (such as in quotations) — are mine alone; I do not publish "guest posts", or use others' editorial material. And my opinions have not been reviewed, sponsored, edited, approved, or otherwise influenced by any outside agency.